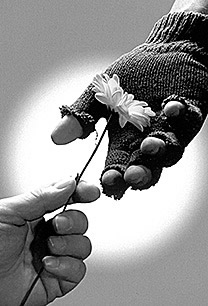 Conclusion of the month is only a word to describe on it- hazy. That wasn't my month that I couldn't even prescribe what would be happened. Prejudice, criticism, sarcastic.....

I 'regain' with a friend that got in conflict for long. Not to say regain, but at least the flaming anger is started to turn off, my intuition. The consolation part is we both finally grown up.

A thankful should be credited to all of us as the conflict taught us a valuable lesson that we'd never learnt.

There's a thought came through my mind just so sudden. Go back in time, we used to be such childish and immature to simply get in conflict that set us woez. To be a stranger at least is better than to be an opponent. A gleeful one. At least we speak out our own uncritical views that would not ruin any feelings of us.

Simply appreciate with it.

Here's a story that I thought of just now because I was hinted by a friend's words.

Two friends are get in financial crisis, one needs 500bucks, one needs 6,000bucks. Someday, they get some money which is 500bucks inadvertently. The one who needs 6,000bucks give the money to another friend. He finally claims that the 500bucks could save his friend whereas those money can't save himself due to the huge debt and 500bucks is just only part of it, cure nothing.

A good company is being like that.
Written by Junorlaw