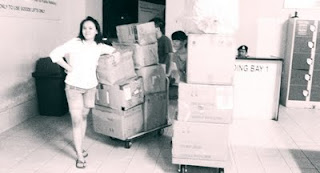 I would have been releasing my updates at early night, promises gotten in mind that telling not supposed to be in this hour, as 1.34am, I know. All these attributed of a cause that I was working from 10pm until 12something. On this account I took a super late dinner that so called supper half an hour right before now. I was working for the arrangement and stocking up the shirts that being shipping from China, to our new established shop, yet to be launched actually, Tuesday would be. I was actually enjoying the joyous of working together with friends even was a lately night, early midnight. From my thought, as before, juvenile who works is definitely a person who doesn't do well in academic, it's so sarcastic I'm working throughout two of this years. I gradually known that a juvenile works might not for the failure on studies, but a faith or financial crisis. So I get to work since I was start studying in college. There are uncountable jobs that I have been worked thus far. All of this need a belief to insist of, quite hard though.